The St. Louis couple who pointed guns at Black Lives Matters protesters last month say they believe they acted within their rights to protect their home as Missouri’s Governor announces President Donald Trump will get involved in the case.

Mark and Patricia McCloskey are under investigation for brandishing an AR-15 and a handgun at protesters in front of their mansion on June 28, claiming they feared for their lives.

St. Louis Circuit Attorney Kim Gardner, the prosecutor investigating the couple, says Gov. Mike Parson and Trump ‘came after her’ and are intimidating her for reviewing the case.

On Tuesday the Republican governor defended the McCloskeys saying the couple had ‘every right to protect their property’ at a coronavirus news briefing.

He said he spoke with Trump just before the press conference and the president ‘doesn’t like what he sees and the way these people are being treated.’

He said Attorney General William P. Barr ‘was represented on the call’ and he believes both will ‘take a look’ at the McCloskey case.

‘The president said that he would do everything he could within his powers to help with this situation and he would be taking action to do that,’ Parson said.

Trump said any attempt to prosecute the couple for a crime would be a ‘disgrace’, during a Tuesday interview with conservative news website Townhall.

‘And these people were standing there, never used it and they were legal, the weapons. And now I understand somebody local, they want to prosecute these people. It’s a disgrace,’ he added.

Trump has been an outspoken opponent of protests unfolding across the country in solidarity with the Black Lives Matter movement and decrying police brutality.

On Tuesday Gardner released a statement slamming Parson and Trump saying they ‘came after me for doing my job’, after Parson suggested he wanted her removed from office.

‘While they continue to play politics with the handling of this matter, spreading misinformation and distorting the truth, I refuse to do so,’ she said.

She scolded Parson for seeking advice ‘from one of the most divisive leaders in our generation to overpower the discretion of a locally elected prosecutor.’

Gardner, who is black, said Trump and Parson were launching racially motivated attacks against her.

‘It is also incredible that at a time when our nation is dealing with a rapidly spreading deadly virus and our State reported a record number of new infections, they are launching these dog-whistle attacks against me. They should be focused on their jobs, & I’ll focus on mine.’ 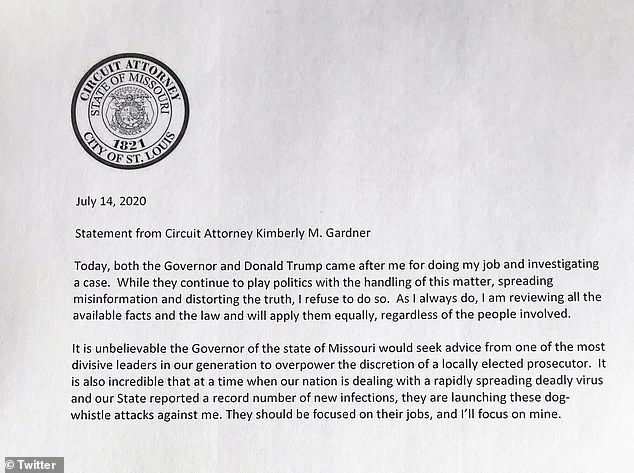 On Tuesday Gardner released a statement slamming Parson and Trump saying they ‘came after me for doing my job’, after Parson suggested he wanted her removed from office 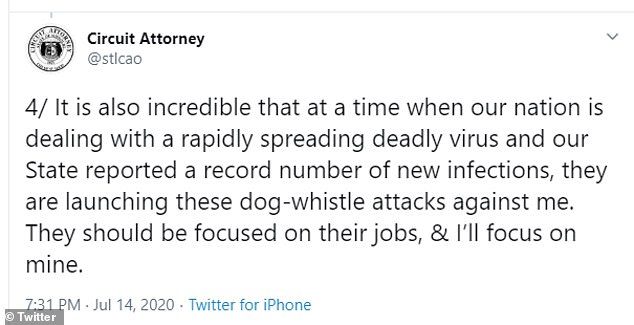 Despite the threats Gardner said she would not back down. She said: ‘It is also incredible that at a time when our nation is dealing with a rapidly spreading deadly virus… they are launching these dog-whistle attacks’

However, it’s not clear how Trump would get involved in the case, where the federal government has no jurisdiction and would be legally questionable depending on the assistance provided.

In the June incident the McCloskeys claimed they feared for their lives when more than 100 protesters marched and chanted to St Louis Mayor Lyda Krewson’s home and walked on their private street.

The McCloskeys claimed the demonstrators broke their gate. While the protesters acknowledged trespassing on the private street, they denied damaging any property.

Parson defended the couple saying they were legally allowed to brandish their arms under the state’s ‘castle doctrine’, Missouri’s ‘stand-your-ground’ law that allows property owners to use force against intruders if property owners fear imminent harm.

The couple’s attorney says there’s no basis for criminal charges. 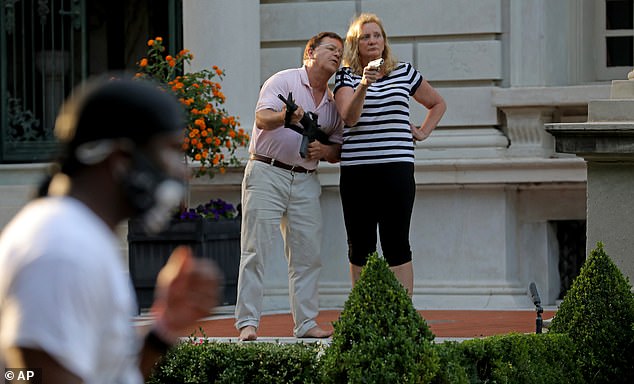 Mark and Patricia McCloskey claimed they feared for their life when Black Lives Matter protesters marched past their house towards the residence of St. Louis Mayor LYda Krewson on June 28 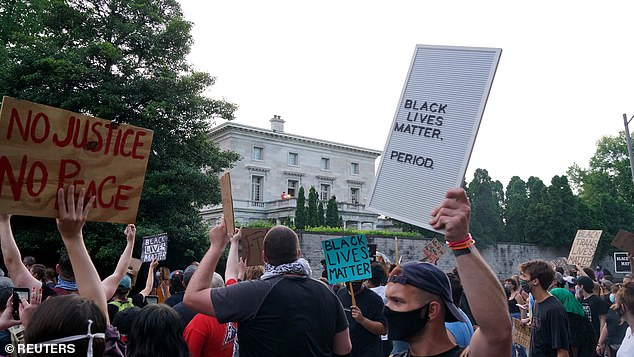 The search turned up the AR-15 that had been held by Mark McCloskey, while a handgun brandished by Patricia McCloskey was already in possession of her attorney. Those arms were reportedly legally owned.

He believes that the second night of protests in front of his home, Trump sent in people to ‘defend’ his neighborhood.

‘I think we got help from the very top. That night, we had cooperation, I think, from the federal government, from the state government, the local police department. That night everybody stood up like champs but it came from the top down,’ he added.

He maintains that he and his wife did nothing wrong in the incident.